Rutherglen's wine history is thought to date back to some time in the mid to late 1850s when Lindsay Brown planted a four-acre vineyard on his 'Gooramadda Run'. Regarded as the father of the Rutherglen wine industry, Brown is credited with the enduring quote -

'Dig gentleman dig, but no deeper than six inches, for there is more gold to be won from the top six inches than from all of the depths below'

More plantings soon followed and the wines of the North East soon found strong favour throughout the colony. Given the limitations of the time it's incredible to think that just 30 years later Rutherglen would be considered an international wine industry player, boasting some of the largest estates in the world.

Many wineries established at this time are still flourishing today.

*Excerpts of this article were taken from 'Rutherglen - Wine Centre of North East Victoria', written by Brian Lloyd and John Kennedy in 2007. Copies of this fascinating book are available from the Rutherglen Wine Experience 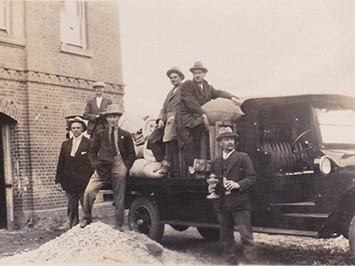 Timeline of our wine region